What to do with a Rooster 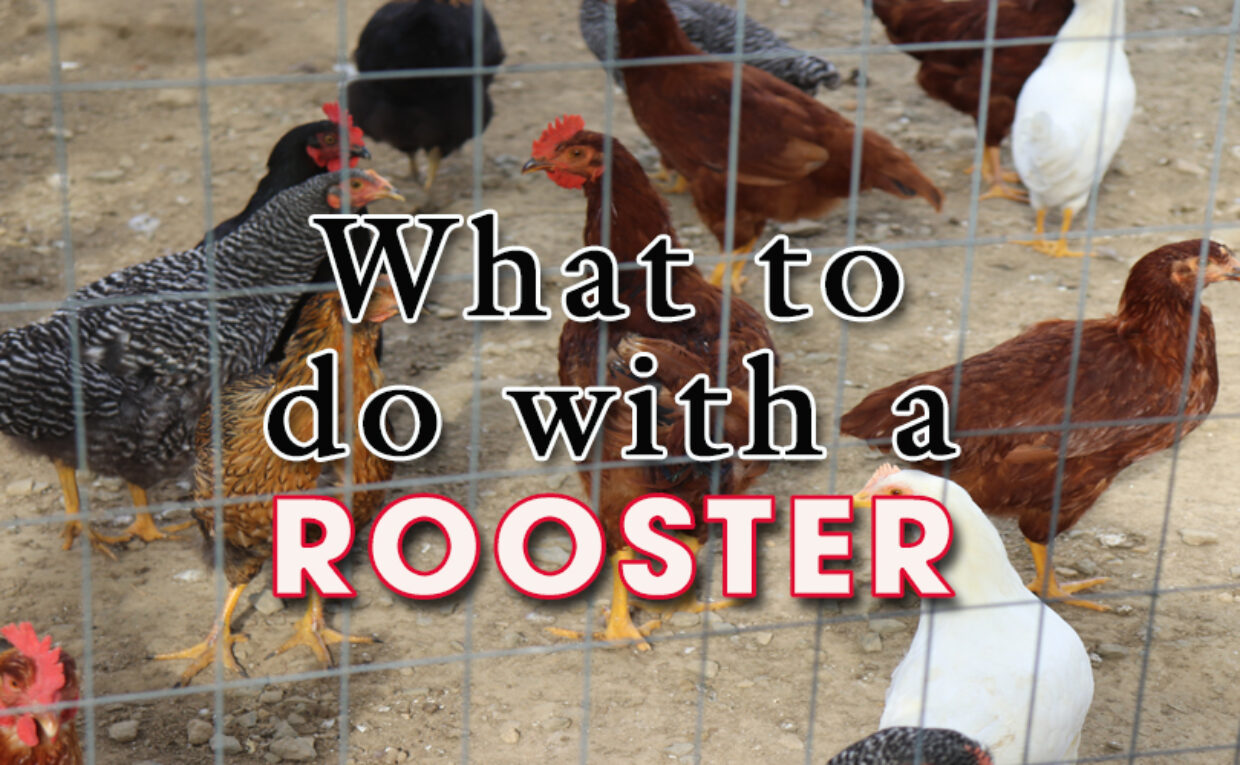 It never seems to fail. You head over to your local feed store to pick up you new chicks. The chicks are labeled pullets, which means they are supposed to be females. But sure enough as the chicks turn into hens, you realize you have a rooster.

Roosters don’t lay eggs, they can be aggressive and unless you want to hatch your own eggs, are totally unnecessary for the production of fresh eggs.

Now what do you do?

Let’s back up a moment, shall we?

First off, I must say that I have no idea how to sex a day old chick and I give total kudos to people who have this skill and can do this with any sort of accuracy. The fact that they miss a few here and there is to be expected. That said, either we have just been extremely unlucky lately or this skill is becoming harder to find because we have been hit by an unusual amount of roosters.

For us, though, it isn’t necessarily a bad thing. And here’s why.

A couple years ago, farmer Dennis and I were at a local farm supply store and they had baby chicks for sale. Not only were they “for” sale, they were “on” sale. When it comes to both chicks and sales I am like a dear in headlights. Put the two together and I am a complete sucker.

Sure enough, I left the store that day with twelve “pullets” of various breeds and was a happy (albeit crazy) chicken lady.

I would later discover that my “bargain” was not such a bargain after all.

We lost one chick in the first week. Chicks are quite fragile creatures and to lose one is not unusual no matter how long you have been doing this chicken thing.

Then, as the months wore on, we began to realize that some of the pullets were actually boys.

How did we know?

Boys have hormones that help them grow bigger and stronger than the hens. They have extra oils in their skin that make their feathers shiny and much longer than the girls. And they crow.

While we can’t pick the winning lottery number, that year we ended up with FOUR roosters! That’s right. One third of the chicks we bought were roosters. (Now, if you’ve been doing the math here, we started with twelve, lost one, then had four roosters. That left us with seven hens. One hen turned into a rooster the next year (that is another story for another time) leaving us 6 laying hens. So much for that 2for1 deal.)

While we typically keep a couple dozen hens at a time, we have no need for one rooster let alone four.

If you end up with unwanted roosters like we did. There are a few things you can do.

The first year we had chickens on the farm we ended up with a Rhode Island Red rooster. They are big, aggressive birds and after he attacked me twice, I knew he had to go. We put an ad in Craigslist and within a couple of days, Stu went home with a nice family who wanted to make him dinner.

If you are okay with this and are ready to process your own birds, roosters make the BEST BROTH! Process the roosters like you would a meat bird, mark them for broth, over the winter take one out, stick it in your crock pot with a bunch of vegetables, herbs and water and let it simmer for twenty-four hours. Strain through several layers of cheese cloth and freeze the broth to use in soups and other recipes. It is even wonderful (and healthy) plain. This is what we did with three of the four roosters we had.

Back to my four rooster story. On the day of processing, one of the roosters got loose and hid for the entire day. It wasn’t until the next morning he showed up. This rooster was an Easter Egger and was pretty mellow. In fact, he preferred to hang out with Jack, our Nigerian Dwarf wether. You would often see him hitching a ride on Jack’s back.

Since he wasn’t aggressive we decided he could stay.

Then one day when the hens were free ranging in the field I saw a red-tailed hawk swoop down towards the hens. I started to run, but knew I would never make it to the back of the property where they were scratching for bugs and I figure the hawk knew that, too.

As I ran around the corner of the coop I could already hear the hens squawking. But as I came up to the area where I could see them I was shocked at what I saw. There was Rooster fighting off the hawk. On the ground, hawks are not as formidable. Both birds faced off and feet and talons were flying. Within a few seconds the hawk flew up to a branch in a nearby tree and Rooster strutted around making sure she knew he was king of his flock.

From then on we decided that Rooster had earned his right to live out his life on the farm and could sleep with or ride on whoever he pleased.

If you have a small backyard flock, having a rooster probably doesn’t make sense. But if you have several hens and you let them free-range like we do, having a good rooster is actually beneficial.

We lost Rooster last year. But not to worry. In our group of new pullets we found this “hen” who we are pretty sure is a “he.” He is a Rhode Island Red and if he becomes aggressive he will become winter broth. If he learns his place and sticks to protecting his flock, then he may get to stay.