Make your own chicken broth

You probably know that having chicken soup when you are sick makes you feel better.  Science has proven that claim.  It makes sense.  You simmer fresh veggies, herbs and chicken in a pot, strain it and Voila! All the vitamins and minerals from the chicken and vegetables are released into the liquid making a hot, nourishing broth.

We processed chickens twice this year.  Fresh raised chicken is by far the tastiest chicken you will ever have.  It tastes like chicken “used” to taste when chicken had flavor. (If some of you are too young to remember that time, I feel for you!)

It’s true.  When I was growing up, we would often have chicken on the grill in the summer.  There were no gas grills back then. (Yes, I’m that old!)  We would start the charcoal early and let it get nice and hot.  Then slather barbecue sauce all over the chicken and let it cook nice and slow over the coals.

Ahhh…those were the days. Back then, chicken wasn’t injected with liquid sodium to make the breasts look juicy. 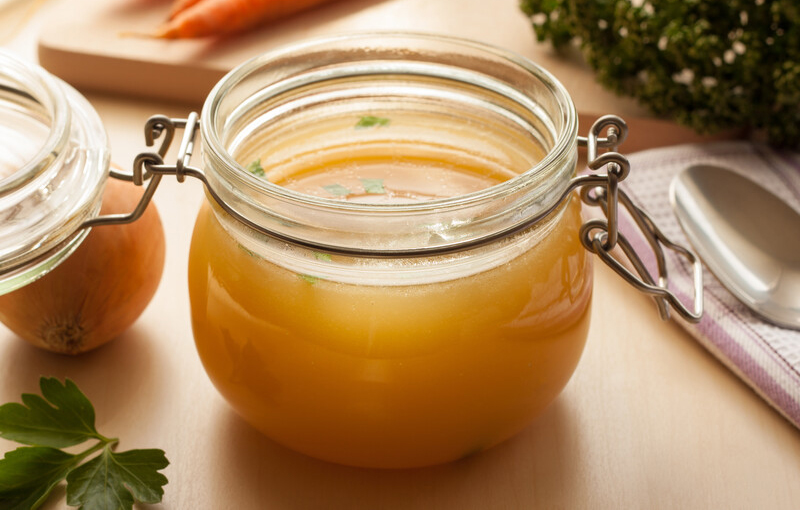 Because it is just the two of us, any chickens we keep for ourselves we often cut up.  We package the two legs in one vacuum sealed bag, a breast in each bag and the wings in a third bag.  If we do this with 5 or 6 chickens, it gives us enough meals for several months.

But then we end up with a lot of carcasses.  Those, too, go in vacuum sealed bags.

On a cool early fall day, I pull out two or three of the carcasses, a couple of my crockpots and all the veggies and herbs I need.  (Note: you can use any chicken carcass you have, even one left over from a chicken dinner.  The seasoning you used to cook it will give your broth a unique flavor all its own.)

There’s no right or wrong way to make chicken broth.  I place one or two carcasses in the crock pot.  You may have to cut up the carcass for it to fit.  Cover with water and add in celery, carrots, onions, garlic and fresh herbs from the garden.  I put the crock pot on low and let it simmer for 24 hours.

When the bones start to break apart, the broth is ready to be strained.  Let it cool first.  Then line a colander with a few layers of cheese cloth and strain your broth.

I usually take the broth and put it in 4-cup freezable plastic storage containers and freeze it.  But if you have a pressure canner, you can can your broth, too. Make sure to follow the manufacturer’s instructions.

I don’t salt my broth before I freeze it.  This allows me to salt and pepper to my personal taste in the recipe I am using the broth in.  I just used one of my containers of chicken broth to make a hearty potato soup. But you can use your homemade broth in any recipe that calls for chicken broth.

Or, make yourself a nice bowl of nourishing broth or your favorite chicken soup.

The options are endless.

Once you’ve had your own chicken broth you won’t want to go back to the store-bought stuff.